The sun is the source of all life on earth, but how effectively can it keep the lights on in your house, fuel a car, or heat a factory? Debate rages about how efficient, disruptive, or expensive the switch to solar might be. Meanwhile, many scientists and pundits argue that renewable energy is long overdue.

Where does solar energy come from?

The sun, of course! Like every other star, the sun formed when gravity pulled great clouds of hydrogen together. As the hydrogen atoms were driven together, their temperature skyrocketed. Eventually, these extremely hot and fast-moving atoms started to fuse together to form other elements. And fusions create energy – heat, light, X-rays, or nuclear radiation, depending on the type of fusion. Our sun produces heat and light, which powers life on earth at the most basic level. And through new technology, it can also power your home. 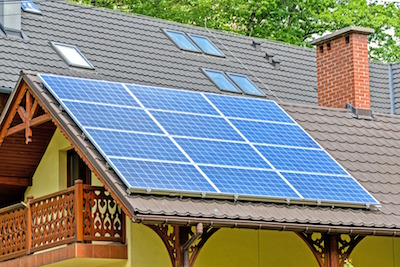 How does it create energy?

There are a handful of ways to convert sunlight into thermal or electric energy. Photovoltaics, or solar electric, is probably the most recognizable. That’s what you’re looking at when you see big shiny solar panels installed on people’s roofs. Those solar panels are made up of silicon photovoltaic cells, each of which contains a positive or negative electric charge. The top layer of a solar panel is negatively charged, and the bottom layer is positively charged. This creates a sort of path for when a photon of sunlight kicks an electron free from an atom on the panel. The electrons gather on a metal plate at the side of the panel, then run along a wire to the power grid or a generator.

A simpler way to harness solar energy can be found in solar heating and cooling systems. The most basic example of these types of systems is solar water heating technology, which collects heat from the sun and transfers it to a water tank through insulated pipes. Similar systems are used to heat air. There’s also large-scale concentrating solar power, which collects thermal energy through massive, trough-shaped mirrors and runs it through a high-temperature transfer fluid into a steam turbine. Finally, passive solar energy refers to clever building designs that distribute heat from the sun in the winter and reject it in the summer, eliminating the need for heating and cooling systems.

Solar energy lives up to its reputation as a clean energy source with no greenhouse gas or toxin emissions. But there are minor concerns about the technology that harnesses it. Large, utility-scale concentrating solar power systems require a huge amount of land use and may compromise local ecosystems. And other systems use a high volume of water. Overall, though, the environmental impact of solar is negligible compared to the largest sources of energy in use today.

What are its common uses?

Since solar technology is relatively new and still developing, there’s a hodgepodge of uses in place for it. Solar panels most often funnel electricity into the neighborhood grid, but some homes are powered by it independently. Factories and other industrial sites run by concentrating solar power are typically powered by solar alone. Solar heating and cooling systems, and passive solar technology, harness solar only for heating and cooling of spaces and water sources – not electricity. And every so often, new gadgets hit that market that are powered by the sun, from tablets and cell phones to flashlights, mini-fridges, and even trains. Solar technology is most widely used in Europe, where governments have placed tax incentives and invested in infrastructure.

How much does solar energy cost?

Solar and other renewable forms of energy are much more expensive than fossil fuels – for now. This is less a reflection of solar itself and more a reflection of the infrastructure already in place, which favors fossil fuels. As newer and more efficient solar technology hits the market, and governments set in place tax incentives for businesses and communities to invest in solar, it becomes more affordable.